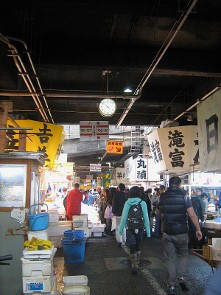 Tsukiji is the largest fish wholesale market in the world; it’s located in Tsukiji, Tokyo.
It was built in 1935 because the markets which had been taking major roles of food distribution for Tokyo since the Edo period had all been destroyed by the Great Kanto Earth quake.


Tsukiji Fish Market has 2 distinct sections.
One is the inner market called JO-NAI SHIJYOU for auctions which is lined with small stalls operated by small licensed dealers, many Kaisen-Don restaurants and some Sushi restaurants.
The other is the outer market called JO-GAI SHIJYOU which is mixtures of whole sale and retail shops selling kitchen-tools, vegetables, seafood, dry food and kneaded food of minced fish and so on.
Most of the visitors arrive here early in the morning to enjoy fresh sushi or kaisen-don for their breakfast.

The restaurants in the inner market typically open from 5:00am to 12:00pm, from Monday to Saturday and the outer market closes around 15:00.
The Tsukiji market is closed on Sundays, public holidays and twice a month irregularly in addition to Sundays.


Visiting Tsukiji Fish Market is for anyone eager to try Japanese fresh seafood dishes, for example, sushi and Kaisen-don.
It’s also famous for having many delicious restaurants like ramen(Japanese noodle dish that originated in China) restaurants, tamagoyaki (pan fried eggs with sugar and some Japanese spices) restaurants and motsuni (stewed beef stomach with leak and Japanese spices) restaurants.
In the Shin Ohashi Street, you will find those standing- up- eating restaurants which are one interesting feature of the Japanese culture. It is fun to try to eat in that crowd.
Here you will find lots of ingredients you’ve probably never seen or eaten before, but we want you to try many of them with curiosity and enjoy real Japanese food which Japanese chefs cook.

Also, occasionally, some of the restaurants show the slaughter of 100Kg to 300Kg Tuna to the public.
It is a mind-boggling sight to see 100Kg to 300Kg Tuna being cut with a special knife like a saw.
As the schedule is shown on their web site shortly before it happens, it’s hard to plan for it, but, if you find crowds of Japanese gathering in, you should have a look with them.
As one recommendation of one-day Tokyo-sightseeing starting from Tsukiji Fish Market, walk from Tsukiji through Ginza-Yurakutyou-Imperial Place to Yasukuni shrine; it’s a bit of a long walk, but it’s doable.

Today, it’s a major attraction among Tokyo’s sightseeing spots, and many tourists from all over the world visit here to enjoy fresh sea food.
It is exciting to see the bustling market, to watch scooters and trucks that are moving busily and to see many kinds of fish. However, visitors should know that it’s a serious business place for workers.
Because of the interference of the tourists, who were mostly from foreign countries, the tour of the morning auctions had been suspended since April 2008.
Currently the tour is not allowed from April 8 to May8, 2010, in expectation of the Golden Week crowded condition.
Tsukiji market is a very interesting place to visit as a traveler, however, it is a very serious business place as those who are working there.
When you visit Tsukiji market, it’s important to keep the following rules not to disturb workers.

New rules for visiting Tsukiji Market are in effect as of May 10, 2010:

Where do you want to go in Kanto?

How to get to and around Tokyo

What you need in Japan and before/after in Japan

Things you need once you are in Japan!?
Find more...