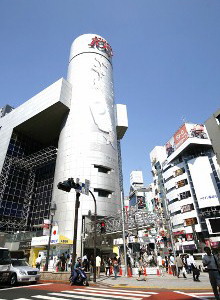 Shibuya is one of the three bustling towns of Tokyo, the other two being SHINJUKU and IKEBUKURO.

At first, get out at the HACHIKO-EXIT when you arrive at the Shibuya station.
Coming to a stand at the scramble crossing in front of the station, you might be quite surprised at the giant screen.
It is famous for its crowds, with a mass of people at the crossing; especially on weekends. When you visit Tokyo, it might be a good idea to allow yourself the time to go and have a look at the crowds there.
The street ahead of the scramble crossing is Center Gai (Center garden).
Together with DOUGENZAKA and MEIJIDORI (Meiji-street) it’s one of the most famous streets where young people gather together all day. as

There are many department stores - for example Tokyu, Seibu, 109(Ichi maru kyu), Malui city - clubs with live music and movie theaters which set the trend for youthful fashion in Shibuya as well as the neighboring towns of Harajuku and Daikanyama.
One thing is for sure, Shibuya is a very exciting city where trends go in and out of fashion in an eye’s blink.

Fashion towns Shibuya, Harajuku, and Daikanyama are easily accessible from each other. It shouldn’t take more than 30 minutes on foot.
The street on both sides of Meijidori from Shibuya to Harajuku or Omotesando is lined with many fascinating shops. Walk more deeply into narrower streets!! It should be even more unique than the main street is.

At the same time, world’s leading musicians perform quite often in Japan including in Shibuya.
Check out the schedules of artists you like before you visit Japan so you won’t miss the chances to see them in Japan thus making your trip even more memorable.


Where do you want to go in Kanto?

How to get to and around Tokyo

What you need in Japan and before/after in Japan

Things you need once you are in Japan!?
Find more...